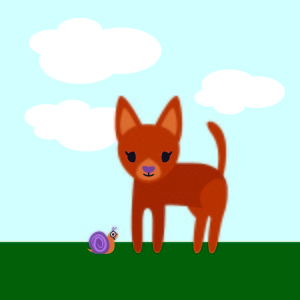 I know what I saw. I know what I did. I didn’t hurt Duchess, Forbi. I saw what did though. It was a big dog with glowing yellow eyes and teeth the size of my whole leg. He growled low and deep, slashed my chest with his paw and warned me to stay away.

Leola nodded at me then zoomed down to Oliver and hovered just above his eyes.

Oliver, please continue. Tell us exactly what you saw last night, just as you saw it. We need to know.

Oliver cleared his throat, adjusted his glasses and started his tale once again.

Well, you see, I was a little preoccupied enjoying my evening cherry. They are so very good this time of year. So, let me see, let me see.

Continuing his story, Oliver remembered hearing Duchess sharpen her claws on the little cherry tree. He decided to slide along to greet her. Before he reached the edge of the roof line a reddish blur grabbed Duchess and started dragging her down the street.

A reddish blur, Oliver? Do you mean red – just like the color of Sasha’s fur?

Forbi’s voice purred encouragingly. Oliver cleared his throat, took his time considering the question, all the while gazing intently at me.

Well, yes. Yes, I see what you are saying. I guess it could have been the same sort of reddish color.

Ryan nodded his head and flashed his tail. Red is red, he thought. Red is nice. Especially the red leaves in fall when the nuts are fresh for harvest. He spun the nut tucked safely into his cheek as he daydreamed about the fall harvest.

Forbi realized Oliver was confused about what he saw and took advantage to ask a few leading questions.

How tall was this red blur you saw, Oliver?

Oliver scratched one eye stalk with the other and though hard about Forbi’s question.

Well, let me see, let me see. I’d say it was big. Much bigger than me. Big, with four paws, pointy ears and a tail. Yes, big with glowing yellow eyes and fangs the likes I’ve never seen before. I will never forget that streak of blood across his chest fur. Never.

Forbi pushed his advantage. Oliver’s answers had gotten less specific as he told his story. Oliver was starting to waver in his conviction about what he actually saw. He knew he could lead Oliver into wrongly identifying Sasha from his own description of the attacker. The blood on Sasha’s fur, when she emerged from the bushes last night, was damning proof he could use to his favor. No Pal had actually seen Sasha get slashed. With a bubbly voice, Forbi asked,

Oh my, that sounds like one of our dear neighborhood Pals, don’t you think Oliver?

Every single Pal gasped and looked accusingly at me. I dropped my ears flat against my head and looked back at each and every Pal – one at a time. Shock and hurt filled my eyes. They didn’t believe me. They believed Forbi and really thought I hurt Duchess.

Ryan nodded his head again and nervously pulled the nut from his cheek. Oliver said the attacker was red, tallish and had four legs. His super quick mind mulled over Oliver’s information and realized…Hmm…it sounds like Sasha. He leaned forward on the fence edge and chittered, nervously spinning the nut in his nimble paws. His thoughts raced and tumbled. One moment he completely believed Sasha was the attacker. The next moment, he knew – in his heart of hearts – Sasha wasn’t guilty. Still, the evidence was mounting.

Unable to hold my words inside any longer, I defended myself once again.

I know what I saw. I know what I did. I did not hurt Duchess. I’ve already told you, when we came outside to investigate, I chased her attacker off into the blackberry bushes behind the green house. I got blood on my fur when he slashed me with his massive paw.

Leola flew to Forbi and looked him right in the eye. With Duchess injured, Leola was now our pack leader. She knew we all needed her wisdom and guidance to figure out who the culprit was. The burden of being a substitute leader for Duchess weighed her tiny wings down. The future of the neighborhood was at stake and the truth had to be told. Yet, somehow, Forbi’s directing Oliver into implicating Sasha didn’t feel right to her.

Forbi, what are you implying?

I’m not implying anything, Leola. I’m stating that, based on Oliver’s own words, we now know Sasha attacked Duchess and is blaming a mythical creature that looks just like her – but isn’t.