On Cherry Wood Lane, good news spreads even faster than bad. Before the garage door to Duchess’ house slid shut, Leola and Ryan were rushing as fast as their wings and paws could go down the streets sharing the news flash with every Pal.

Reaching my house, Leola swooped down and hovered in front of the dining room window.

I shot from my chair and dashed to the window, barking and leaping as high as I could to see out.

Whoo Hoo! I’ll be right there.

I had to see Duchess as soon as I could. I needed to play bow and wag my tail for her. I rushed back to the kitchen and whined noisily – begging for my dinner.

Sasha, hold your fur on.  I’m getting your dinner right now.

Kibble clinked in my bowl. Head down – eyes intent on my mission, I brushed past Diana’s legs and dug in, gobbling as fast as I could. I barely chewed; coming close to choking on the dry pieces, not quite soft yet from the warm broth drizzled over them.

I love dinner. I usually take my time and savor every bite. I love dinner almost as much as I love breakfast but not as much as cheese. Today, I didn’t care about dinner, I wanted to get outside as fast as I could.

With one last swipe of my tongue to sparkle clean my bowl, I ran out of the kitchen towards my harness on leash. I grabbed my harness in my mouth and dropped it at Diana’s feet. I ran back and tugged my leash over to her and sat down.

Diana is sometimes slow to recognize how important Pal’s business is so it was critical I force the issue to get outside faster than normal. Thankfully, tonight she realized my urgent dashing back and forth to the door was more than my normal rushing around. I desperately sat – popping up and down and whining even louder – as Diana put my harness over my head and clicked the latch closed.

Okay, Sasha.  Let’s go.  You seem to have some urgent business going on outside tonight.

Yeah, I did have important business.  I pleaded Diana with my eyes to quit talking and get walking.

Off we went down the street.  Against all the advice from training classes I’ve ever had, I’m usually the line leader, not Diana. Tonight I directed us towards Duchess’ house instead of the regular way to the park. Pals and humans were gathering in the front of Duchess’ house, crowding each other to talk and welcome her home.

I reached Duchess’ porch just as her front door opened and her human came out with her cradled gently in her arms. She set Duchess down in her soft porch chair and hugged human after human accepting their well wishes as if they were for her and not for Duchess.

I waited on the sidewalk until Duchess saw me. Amazingly, she slowly walked down the steps and joined me on the sidewalk. I presented my best play bow ever, laid down and softly cried in pure joy.

Every Pal and human stared at me in shock. I’ve never laid down quietly in front of a anything in my life. I flattened my ears and deliberately inched forward, my tail slowly wagging as a sign of my sincerity.

Ryan scampered to the edge of the fence a few feet away and sat next to Oliver. Oliver had stayed close to Duchess’ house waiting patiently inside his shell for this moment. Ryan high fived Oliver’s eye stalk then happily chomped on a walnut he pulled from his cheeks. Leola delicately landed on a branch in the big cherry tree next to Duchess’ garage; while Forbi sauntered up and wove his way through the human’s legs to be next to Duchess.

A satisfied smile crossed his face as he deliberately looked at me then inched closer to Duchess so he could put one of his paws comfortingly on hers. 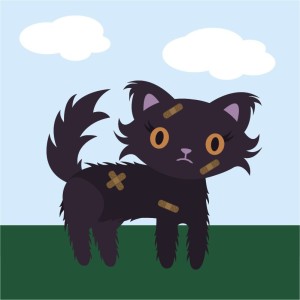 Covered in bandages, Duchess gently gazed at each Pal one at a time. Slowly, she looked straight at me and purred out:

Thank you for saving my life, Sasha. I would not be alive if you hadn’t chased away the attacker.

Duchess just permanently settled the question of me being her attacker.  Shock and a flash of pure anger skittered across Forbi’s handsome features, his ears flattened and he hissed menacingly.

Forbi, I hear you let your jealousy towards Sasha obstruct the truth. Your deliberate and unkind actions put all of your friends in danger. The real attacker is out there in the Dark Woods, just on the other side of the Big Street.

Diana reached down and gently scratched Duchess behind her left ear.  It was just about the only place not covered in bandages. Duchess blinked her eyes closed and sighed heavily. The ride home from the vet had deeply tired her. Slowly she climbed back up the steps to her front door, walked to the threshold, turned and focused her piercing golden eyes directly at Forbi.

Forbi gulped guiltily and bowed his head in shame. He had put his quarrel with Sasha ahead of his friends. His fear of not being the favorite Pal colored his actions and pushed good judgment out of his mind.

Forbi, you and I will talk about your selfish quarrels when I feel strong enough.

Balance, joy and community had returned to our little neighborhood. Each Pal and human happily wandered off back to their own activities. I quietly walked alongside Diana, knowing I now had to be braver than ever before to accomplish dangerous work I to do.

Evening shadows darkened my end of the street. A rustle in the bushes – just loud enough for only my huge radar ears to hear – caught my attention. I looked up right into glowing, desperate eyes hiding just out of Diana’s sight.