Diana and I made our way to the park so I could work off some of my energy before bed. I distractedly sniffed my way down the sidewalk as we headed to the park in the very center of our neighborhood. My thoughts were heavy and important.

Once there, Diana took a seat on a wrought iron bench and chatted with one of the other humans that lived on the lane. She let my extension leash unwind all the way out as I sniffed my way into the shadows from the tall fir trees.

Back to the sun and noisy human chatter, I sat down and worried over how I was going to find the creature that hurt Duchess. I had a few ideas but they all seemed to require me running away. I wasn’t keen on running away. I admit I’ve gotten a bit lazy since I got adopted and prefer my dinner in my hand painted bowl rather than from garbage bins.

Leola had to dive-bomb my head a few times just to get my attention. I looked up and watched in wonder as she landed so softly on a branch it didn’t even move. She settled her feathers and looked down her long beak at me, her bright eyes soft in friendship. Her ruby throat shimmered in the dim light. She didn’t say anything; she just let the moments pass quietly until I was ready to talk.

Hi, Leola.  Thanks for the support at the pals meeting this afternoon. It means lot that you believe in me.

Leola flew down and hovered just above my ears. Her soft voice smoothed my hurt feelings.

Of course, Sasha.  I know you didn’t hurt Duchess.  Oliver refuses to talk about it anymore because he’s afraid he’ll get the story even more confused and make things even worse for you. Ryan is – well – he’s on the fence about your involvement, though. 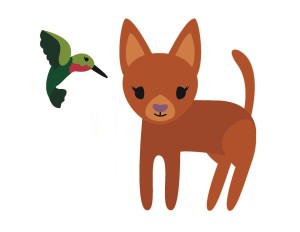 I wagged my tail to show I was okay and understood she was trying to smooth things over between us all.

Ha, Leola.  Ryan is on the fence about most things all day long.

Leola bobbed up and down in front of me, her petite body laughing at my familiar squirrel joke at Ryan’s expense. I completely believe if a joke is funny once – it’s funny a thousand times. She took it as a good sign that I was able to joke – even if it was a worn out joke about the nature of squirrels.

True.  True. Now, Sasha, enough moping about.  We need an action plan.  Duchess will be home tomorrow and we have to solve this mystery before another pal gets hurt. What do you remember about the attacker?

I thought for a few moments about the other nights events. I replayed the events step by step and realized I remembered more than I had initially thought.

I remember it was bigger than me with huge eyes and teeth but still looked like a dog. I remember it was very, very thin. Now that I think back, maybe it is starving and took advantage of a moment. Maybe it’s not an evil creature – just a desperate one.

Leola nodded her tiny head in complete agreement with my assessment.

Yes, that’s what I think too. I hear things at night, safely tucked in my nest, you know. Night animals talking and whispering about a creature that comes down from the hills during the darkest hours asking where it can get something to eat.  It told the old raccoons that live in the big trees that his forest didn’t exist anymore. It was now filled human homes.

I’d wondered about that too. When I first moved to Cherry Wood Lane the dark woods went for miles and miles east towards the Cascade Mountains. Now, when I was lucky enough to go for a car ride, all I saw were houses and yards and roads and other cars.

If it’s hungry, maybe we can lure it back with human food? Once we can see it for ourselves, maybe we can help it find its way back to what is left of its forest.

Neither one of us considered just how dangerous it might be to try to lure the creature out into the open. Our thoughts were only on solving the mystery.

Very good idea, Sasha. See if you can distract the humans tonight when they take their garbage out.  Somehow get them to leave it outside the bin. The smell should attract it back and then we can be super brave and talk with it.

I stood up and dug at the grass under my paws. I always do this when I am resolved.

Okay, Leola.  It is done.  I will pretend to forget all my Bark Buster lessons and engage ‘out of control – untutored dog’ mode.