I woke up early, rushed through a routine, morning yoga session and trotted downstairs to check on the party preparations.

Diana zoomed round the kitchen making burger patties and potato salad. I walked right into the middle of the kitchen and test drove a possible plan, pretending to dance to the right, but actually sliding to the left.

The flat tray of burger patties nearly fell to the floor as Diana did her best not to step on me. Glaring at me, she shouted an often heard sentence.

“Sasha! Out of the kitchen now. Go to your chair and stop messing around under foot. I almost squished you.”

With my winning plan tested and secure, I sauntered outside, settled in my chair and rested up for the big moment.

The afternoon wore on and soon, bunch by bunch, the humans started to arrive. I shuttled back and forth from the patio to the front door greeting and inspecting everyone’s food offerings. Ever vigilant, I scored two corn chips, one carrot and a blob of cheese dip off one of the itty bitty humans. The getting was easy and it’s always good to practice and keep in top food gathering form.

As the sun slid around past the garage roof, Leola settled on a branch so softly no human noticed her. Oliver claimed his look-out spot on the outside edge of the patio fence – not far from the garbage bins. Ryan – well – it’s hard to say what Ryan was up to. He skittered back and forth along the fence, up the roofline, back down to the fence – only to repeat his route over and over again. I think he goes all nervous and must be in constant motion or he will entirely freak out. Ever see a squirrel freak out? It’s not a good sight.

Nonchalantly continuing to chat up everyone, I slyly inspected their plates. Hey, you never know. Food happens. No one suspected a thing. Soon the burgers were ready to come off the grill. It was show time.

The slight smile on Diana’s face convinced me she was visualizing picture-perfect burgers. Satisfied the patties were seared just right, Diana flipped each one onto the tray, plain ones, cheese covered ones, ones with sauce and some hardly cooked at all. She turned to put the tray on the table.

The patties never made it. Maybe some math might help explain what happened next:

Ryan sprang from his hiding spot in the rose bushes with a zigzag run as fast as he could straight on towards Diana. I sprang from my chair, barking ridiculously loud and exaggerated, pretending to be irritated at Ryan. In slow motion, all the humans watched in awe as he scampered up Diana’s leg, across the front of her shirt, and soared right into the middle of the burger tray. With a massive racket, the whole tray crashed to the ground.

I careened out of control after Ryan all around the overcrowded patio. Shouts and gasps from the adults – screams and giggles from the kids – chased us as we chased each other. Up and over the backs of chairs, weaving in and out of the perfect line of boxwoods, Ryan ran as fast as he could. With all his strength, he bounced off the CD player – causing the music to skid to a screeching halt, then up and over the fence into the safety of the nearest tree.

Just for effect in case anyone got suspicious about what we were up to, I repeatedly flung myself at the fence. My fake angry barks fooled only the humans. Ryan, out of breath, chuckled into his paws and winked at Leola as he continued on his way down the tree and across the street.

Satisfied with our performance, I turned back to the mess behind me. Everyone was staring at me – and not in one of those, “Wow, that was amazing! Do it again!” kind of stares. Nope. I was going to have to stand tall and take a good yelling at. I didn’t care. I could take it because our plan worked.

How do I know it worked? I only had to look at Diana. No one else mattered. None of the finger pointing or the “tsk tsk – someone needs some more Canine Good Citizen classes” comments made a bit of difference to me. All I saw was Diana dejectedly picking up the ruined burger patties – one by one – and putting them into the garbage. I did feel sorry for that part, sort of.

I looked in the tree and wagged at Leola then glanced over at Forbi. Leola nodded her beak up and down in praise. Forbi fumed but grudgingly swished his tail in support. Forbi realized his disappointment at not being the hero simply didn’t matter as much as knowing Tristan would get a meal tonight and it wasn’t a meal with a pal as the main course.

Michael hugged Diana, trying to cheer her up, grabbed the bag with the ruined patties in it and put the whole thing in the garbage bin, none the wiser that Oliver had slid up the can and settled on the edge, using his hard shell to keep the lid open just enough for paws to slid it off when the time came.

After a bit, Michael righted the CD player, the music started up, grumbling and concern settled back down, and all returned to happy party mode. I returned to my chair and unsuccessfully tried not to look smug. 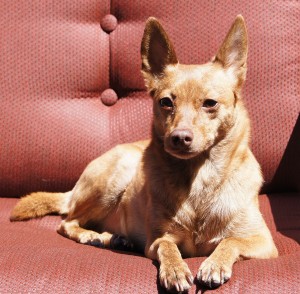 Sasha on her patio chair

No one would go hungry. There were plenty of salads, grilled sausages and ‘Smores to satisfy everyone. My job was done. I rejoined the party, happily knowing I’d done my best. Forbi and Duchess would do the rest to see Tristan fed and safe for his last night on Cherry Wood Lane.

Based on what you learned in today’s post, the Pals want you leave us a message with your answers to the following questions:

Don’t Forget To Share our story with your friends. The Pals need everyone’s help to save Tristan.